Merry Christmas and all the best for the coming New Year! This is my Christmas Letter for 2014 – a web page suitable for reading online.

In February and March of this year, I sailed aboard Holland America’s ms Statendam on a month long cruise from San Diego, California to Hawaii, Fanning Island, French Polynesia, and returned to San Diego. This fulfilled a promise I made to myself way back in 1978 when I first visited French Polynesia to return some day.

It was wonderful to cruise in the warm tropical waters of the South Pacific, and I experienced so many beautiful cultures along the way. I met several people on board who have taken this cruise more than once…they liked it so much! The ship and her crew were nothing short of amazing, and the food and activities aboard exceeded my expectations.

We decided to sell our motor home this Spring since we only used it four times last year. I placed the unit for sale with the same dealer I purchased it from, and they sold it within a week! We had a good run with the motor home; enjoying six years of traveling and camping.

Ever since Tesla announced the Model S, I have been fascinated with this all-electric car. I finally decided to take a test drive in Vancouver in early May. At that point, the car really got under my skin, since I was very much impressed with the test drive. I talked myself out of the purchase twice, but eventually decided to go for my dream car. I placed the order in late May, took delivery in late September, and as I write this in December, my Model S has just over 2,000 kms on it.

I have to say, the Model S has made driving fun again. The instant acceleration and superb handling is a real treat. The silence in the cabin and amazing amount of space is great. The running costs are super low compared with my previous gas engined cars (3 cents/km for electricity for the Model S, versus 18 cents/km for gasoline for my previous Honda Accord). The Model S is a geek’s dream come true with all the high tech features. It is constantly connected to the Internet through cellular 3G and I can control some functions remotely through my iPhone. I’ve given most of my friends test rides, so we’re having fun!

I attended the two summer star parties held on southern Vancouver Island again this year – the RASCals Star Party held near Victoria, and the Island Star Party held at Bright Angel Park in the Cowichan Valley. I always have fun socializing with my fellow astronomers, and the bonus was getting great observing weather for both star parties this year. Of course, I didn’t get to camp out in the motor home this year, but I still managed to enjoy myself. The RASCals Star Party is held in Metchosin, so I simply drove back home after I finished observing each evening. I stayed at a guest house in Cowichan Bay while attending the Island Star Party, so it turned into a mini-vacation. 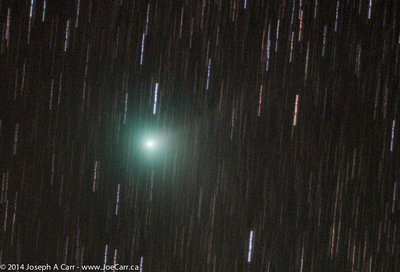 My astronomical observing was limited this year, since I seem to have turned into a wimp – only observing when the weather wasn’t too cold. That said, I still had a productive year. The highlight had to be the partial solar eclipse on October 23rd. The weather cleared, so we had a beautiful view of most of this rare event. I took some photos of the first half of the eclipse using a camera lens. Comet Jacques (C/2014 E2) put on quite a show in late August, and again, I managed to take some nice photos of it.

Best of Europe in 21 Days tour

In September, I took a Rick Steves’ tour through six European countries: the Netherlands, Bavaria in Germany, the Austrian Tyrol, Italy (Rome and north), the Lauterbrunnen Valley in Switzerland, and the Burgundy area of France. I spent a couple of extra days both before the tour started in Amsterdam and in Paris after the tour ended.

This 21-day tour took us through many of the best sights in each the areas we visited. The tour very well organized by a super efficient tour guide. It was a great experience – something completely different for me, who normally prefers warmer climates with palm trees and ocean breezes.

Photo gallery of Europe – pick and choose your area of interest from my photos.

Our complement of pets grew by one this year to four – 2 dogs and 2 cats. If you read my Christmas letter from last year, we tried to bring two cats we were feeding inside last December. We reluctantly had to return one of them (Mello) to outside living because he couldn’t seem to adapt to being inside with his buddy Coda (who has now been living inside for a year). This September, we tried bringing Mello back inside again, and this time he behaved like a normal house cat. Go figure! We are delighted to have both Coda and Mello inside with us. They are best buddies, and even our Jack Russell Terriers Rolly and Tanner are giving the cats some space. They all seem to coexist quite well together.

Speaking of Rolly and Tanner, they are another year older, but refuse to give up their puppy status! They both bounce around like crazy dogs most of the time. We take them for three walks each day, just to cope with the pent up energy these little guys seem to generate spontaneously. Thankfully, none of the pets have had any serious health issues this year.

I will be attending a reunion of the Rick Steves tour groups in January 2015, since it is close by in Edmonds, Washington. This little extended weekend trip will be my first road trip in the Tesla Model S, and I’m also looking forward to reconnecting with a few of the tour group I traveled with in Europe in September

I have an exotic trip booked for February 2015 – Gems of Arabia. I have been watching In Focus Travel tours hosted by a professional photographer for several years, and finally will get to experience one. We fly into Dubai, tour around the United Arab Emirates for a few days, and then spend most of our time in neighboring Oman. Both of these Arab countries are somewhat westernized (especially the U.A.E.), and both are stable and safe for travellers. That said, we will be experiencing much of what these Arabian countries have to offer – both traditional and modern.

On the personal front, both Kirk and I continue to enjoy our retirement here in Victoria. No news is good news, I guess

All the best of the holiday season to you and your family. Merry Christmas and we hope you have a wonderful New Year!