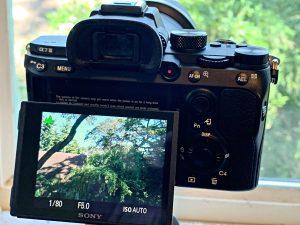 My recent acquisition of the Sony a7 III mirrorless full-frame (24 megapixel) camera has been a revelation in how photographic hardware evolves in new and exciting ways. Although I initially justified this purchase for use while travelling since mirrorless cameras are lighter than traditional dSLRs, of course I had to try using it for night sky photography as well. Several useful features immediately became obvious:

By design, mirrorless cameras are easier to adapt to using third-party lenses since the optical path no longer includes a reflex mirror. I use the Sigma MC-11 mount converter to use some of my Canon EOS lenses on the Sony a7 III. The Canon L-series lenses in particular offer excellent optics, and when used with the MC-11, most of Sony’s innovative features are functional. That said, I mainly use native Sony e-mount lenses, since ultimately, there is no substitute for premium, same-brand optics.

I use an unmodified Canon 6D full-frame (20 megapixel) and a Canon T2i APS-C (18 megapixel) which is modified to be more sensitive to infra-red wavelengths of light. Along with many other Canon dSLRs, the ones I use are all highly recommended by astro-photographers around the world. Canon appears to have developed some of the best low noise high sensitivity CMOS sensors currently available.

The Canon T2i is modified by Hutech for astronomical use. There are several important features which make these cameras ideal for amateur astrophotography:

I use both dSLRs for prime focus photography on a wide variety of telescopes, and also use them prime focus on my Borg 101 ED f/4 Astrograph apochromatic refractor mounted on a Skywatcher HEQ5 Pro mount. I also mount the cameras and telephoto lenses directly on an Astrotrac travel mount or directly on the HEQ5 mount. The Canon CMOS sensors produce superb, low noise images. I normally save images in Canon RAW format, giving 48 bit dynamic colour range instead of the 24 bits used by the standard jpg or tiff formats. The modified T2i is particularly effective when photographing emission nebula, however I also use it when photographing celestial objects that do not emit much infrared since I have it permanently setup for astronomical photography.

The Canon ES 70-300mm L series zoom telephoto is a sweet lens for astrophotography, since it is like having a widefield refractor telescope, but in a smaller form factor. I first used a 400mm telephoto L-series with a Baader solar filter for my shots of the 2006 Total Solar Eclipse in the Libyan Sahara Desert. I have subsequently used several other L-series telephotos for taking wide field Deep Space images, and find them to be perfect companions for travel. The L series zooms are great for astrophotography when a wider field of view is needed.

The Canon TC-80N3 Timer Remote Controller is an important piece of gear for an astrophotographer such as myself. It replaces using a laptop computer to run automated sequences of shots. I have modified the TC-80N3 cable to enable control of either the 6D or T2i by cutting the cable and inserting a mini stereo jack and plug. I plug the two halves together to control the 6D shutter, or use the mini stereo plug to control the XTi shutter.

Astrophotography makes use of the fact that taking a series of images and “stacking” them will create a single resultant image with a superior signal-to-noise ratio. For example, a series of 20 images taken for 1 minute exposure time each will yield a noticeably better image (when stacked together) than a single 20 minute shot. The exposure timing and programming available with the TC-80N3 to control the Canon dSLRs saves me from doing an otherwise tedious manual timing and recording task during my astrophotography sessions in the field.