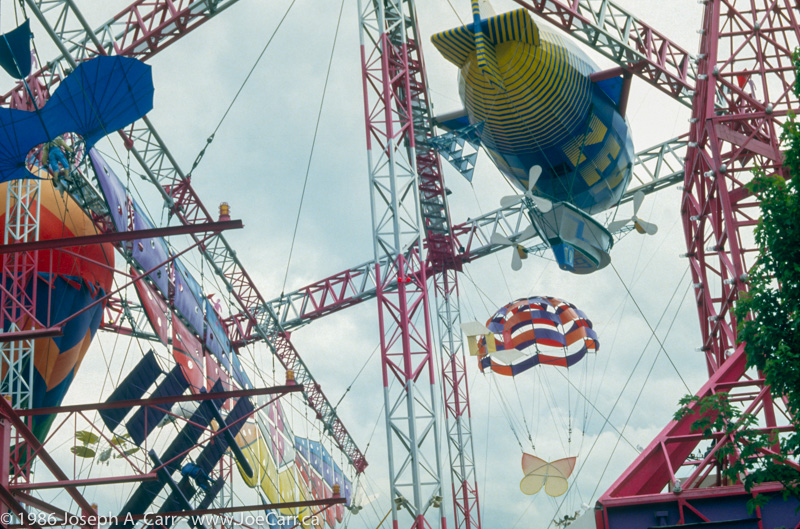 We made three day-trips to Vancouver to see Expo 86. It was a great transportation exhibition, and really marked the coming-of-age of Vancouver as a world class city. I took way too many slides, but when I scanned them a few months ago, I pared it down to 90! Today marks the 30th anniversary of opening day of Expo 86.

As I was poking through the stuff I kept from Expo 86, it struck me that it was really a different era where so many things came together and worked so well.

Premier Bill Bennett appeared on the welcome page of the Expo Passport. His Minister Grace McCarthy stick-handled the whole massive project from the political side and then was later shafted by her own party when she wanted to lead the government. Jimmy Pattison made the whole thing work as the project manager/CEO. Both Jimmy and Grace motivated the province to modernize the liquor laws, to allow people to have a drink with their meals on the various outside venues. Mike Harcourt was Vancouver’s mayor, and of course 1986 was the 100th anniversary of the City of Vancouver.

The Queen started construction by switching on a cement mixer in 1983, and her son Prince Charles and Lady Diana officially opened the expo, giving the city immeasurable profile on the world stage. Prime Minister Brian Mulroney and his wife Mila stood by at the opening ceremony, in the shadow of the Princess!

The Canada Pavilion turned into Canada Place and Vancouver’s beautiful cruise ship terminal. Of course, this was when Vancouver’s Skytrain was first built, and just in time! BCTV did live news broadcasts for the duration of the expo – their studios and exhibit proved to be a popular stop in its own right.

Yeah, it was pretty amazing, especially considering it only ran a $311m deficit!